The new Nikon D5 Digital SR is the new flagship camera from Nikon.

The frame rate is 12 frames per second for high-speed continuous shooting. It features an autofocus system with 153 focus points including 99 cross sensors. It provides a new EXPEED 5 processor to maintain saturated colours and clarity between ISO 100 and 102400.

The new buffer allows up to 200 NEF (RAW) images to be captured during one high-speed burst.

The AF system is compatible to -4 EV, for reliable focussing in low light.

The focussing with this camera is significantly improved when using Nikon’s teleconverters.

This camera offers wireless flash shooting with multiple flash units  and is in my opinion the ultimate professional camera for the photographer with deep pockets.

A new accessory released with the D5 camera is the Wireless Transmitter, WT-6.  When connected to the D5, high-speed transfer of image data to a computer or an FTP server over a wireless network is possible with a maximum range of approximately 200 m. Communications are significantly faster with support for the new IEEE 802.11ac (2×2 VHT80) standard.

Wireless control over the camera from a computer is also possible using Camera Control Pro 2 (available separately). With the WT-6 connected to a D5, the combination also serves as a wireless LAN access point, enabling possibilities of direct connection to a computer or smartphone. 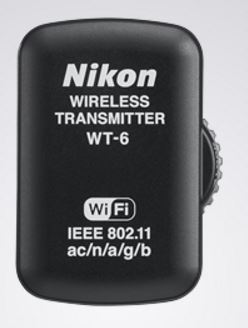 Purchase your gear at B&H.